In this version I added a great deal of the additional fuel and water tanks as well as the second bogie and the cabin support I-beams.

After another trip to the train yard I got a bunch more pics of the Norfolk engines.
This new version reflects corrections to the frame, and an addition of a transmission box & brake disk. 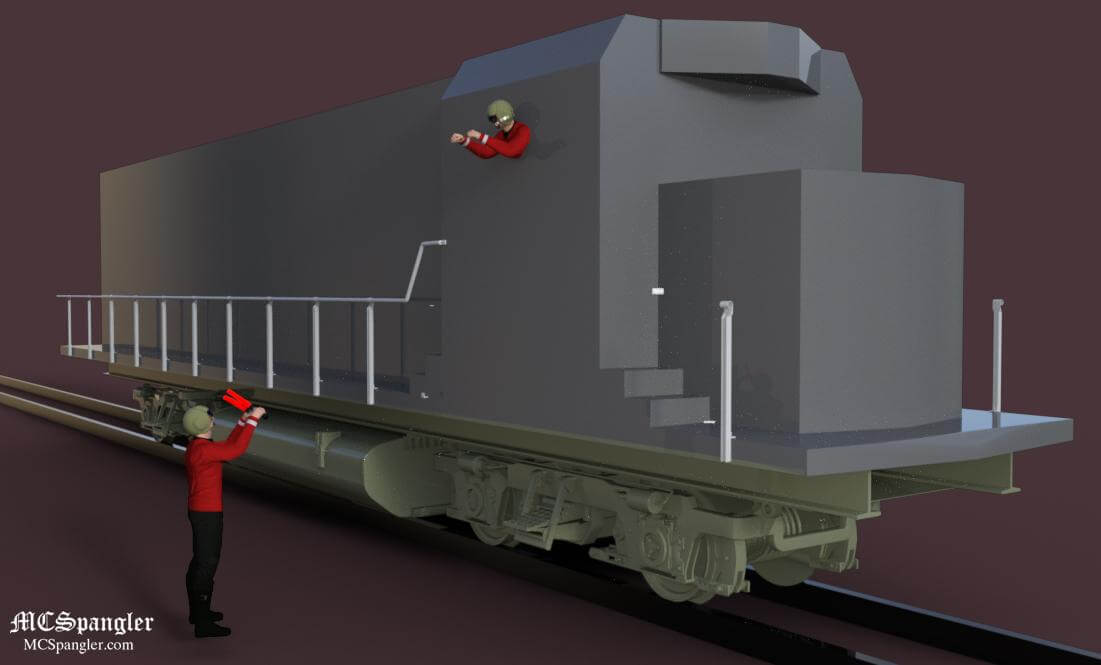 I'm nearly done now with the undercarriage and started dabbling with the body just to break up the monotony.I still have 2 major works yet, to design in the linkage system and nose shovels to the front and rear which are not as easy as you'd think, as well as adding a missing water bottle above the fuel tank and various supporting lines, valves and misc small items that run along the I-Beams, to complete the undercarriage.I've made one, unofficial (unannounced) and two, official (with announcement) trips to the Norfolk yard here in Durham, North Carolina for photos. The guys at the yard were extremely friendly and helpful.The sessions took about 30 minutes each and I took back nearly a hundred digital stills and several short vids so all of this is fairly close to scale as verified with several online data sheets and on sight photos verified by humane scaling so the model should finalize out within a tolerance of maybe 12"mol.

Last visit I had the unexpected pleasure of talking briefly, with one of the engineers (drivers) who happened to be manning the engine when I arrived. I wasn't aware he was there till I looked up 5 minutes after I arrived, and discovered him leaning out of the window, asking what I was doing.We had a short conversation and afterwards he went back to what he was doing.I was sorely tempted to ask for permission to shoot the inside of the cabin but I didn't want to drag out my session nor disturb him in his.Maybe next time?

Currently, the undercarriage alone sits at:

This model started out as a "Norfolk Southern bogie" when I had no understanding of the "rail transit" engineering system.
I started this project in response to another train series I'd seen modeled here and because I needed a good bogie (truck) for another model I was doing (R36) and I assumed the trucks were reasonably similar so since I had a yard here, I could design one for all applications.

What I discovered as I researched was one for all doesn't work.

There are many different designs and differences are great especially between the subway train system and rail transit train system.

When I started, one of the things that caught my attention in the NS series was when I discovered it utilized an unusual bolster design.

Since beginning this project I have discovered (learned) several things, one of the most prominent being the differences between engine designs.

When I returned to the yard for a 2nd photo session later (Aug, 2019), again, unknown to me at the time, I shot my digital's from a 57',  GP38-2 series.
Slightly different but very similar in design.

Now that I'm aware of what I'm looking at I have since discovered many other series in the GP line including a 79', GP40 which has a 6 wheel bogie (not available here  locally (yet anyway).

Spent some time yesterday and today playing with more detail on the undercarriage and today, on the chassis.
Looks like I'm gonna need to go back to the yard to get some more pics of the coupling linkage from different angles to get it right.

I'm considering quarrying NS (or Gen Elect?) for some elevation drawings of the train and undercarriage. That would help magnitudes.

I need to find some pics of the top to get the fan detail there.
Again, not an easy thing.
I have no idea how I can get high enough in the yard to get them but I'll manage, I'm sure.