Ugly figures (only?) in DAZ-Studio (CLOSED)

THIS JOB HAS BEEN COMPLETED SUCCESSFULLY AND IS NOW CLOSED
Ugly figures (only?) in DAZ-Studio

Until now
this happens twice to me.

All trouble
causing figures I found in RenderHub, therefore here a short description of the
problem, analysis and even a suggestion for a fix.

From a
certain time I noticed, that some figures I loaded looked more or less ugly,
especially very nice figures I bought appeared pretty different to the
promotional pictures.

Affected
were only G8 Females, other figures looked like before.

The G8F Base
figure appeared also a little different but wasn't ugly. Other figures had mainly
strange faces or the pectoral area showed either to large or even inverted breast.
Some figures could be accepted, others where that ugly that you can't use them
at all.

By chance I
checked in the first case the 'Currently used' Parameters and saw, that there a
figure had been loaded I didn't load. I set the parameters to zero and my
figures appeared like expected.

Somehow for
each G8F figure a shape had been loaded automatically.

Since this
figure was for free and not really my taste I had no big problems to delete it.
Since I had the original ZIP-File for this figure I could reproduce which files
belong to it and deleted the correct files.

In the
second case I bought a bundle with 5 figures where I already had one out of
them. So I installed the remaining 4 and checked them out.

One figure
out of them looked really nice, the others really ugly: Very small, sharp edges
in the faces the pectoral area showed almost no breast and for sure not in a
nice shape.

Since also
other figures I checked before appeared ugly after installing that bundle, this
old issue came into my mind. But here I did not succeed with checking the
'Currently used' Parameters.

So I did something
different: I loaded a raw G8F figure, saved it as 'Shaping Preset' (Take care,
that this file is uncompressed!)

Then I
opened it in a suitable editor like NotePad++ and saw a few 1000 line groups
like:

Now I had to
search for the lines where the parameters behind "keys" were unequal [
[ 0, 0 ] ]. To ease this, I simply replaced all strings with "keys" :
[ [ 0, 0 ] ] with something like 'Ok' and searched then for the remaining lines
with "keys". Beside some issues with the eye lashes I found one line
like:

Then I searched
in the studio for the Parameter 'Bad Girl', it was set to 1, I set it to 0 and
my figures looked all like expected.

Since this
figure wasn't for free and it looked beautiful I didn't want to uninstall it.

I dig a
little in the folder structure of the studio and found under …\Data\DAZ
3D\Genesis 8\Female\Morphs\ a sub folder for the vendor and the figure with a
file like 'Bad Girl.dsf'.

I opened
this file and saw in the first few lines of it a block like:

Here I
changed the "value" to 0 and afterwards all figures appeared as expected
again.

If you face
similar issues, maybe this description may help you to fix it. 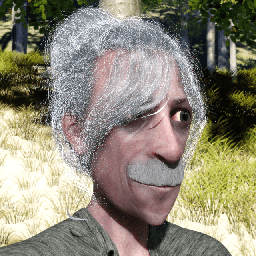 I faced the same and thank you for the message. I t helps a lot

Have a good time